Broke: a year ago, our economy was trundling along without any great prospects but with cracks starting to show. It took a decent crisis, exacerbated by decisions that would probably not be taken again in hindsight to highlight the fragility of our state finances, the parlous state of our governance, the dissonance in our society and the absence of rational, informed leadership in those who govern us. This has led to an accentuation of a great many ills that had lurked under the cloak of normality. Rationalisation (read lack of funds) aimed at improving service delivery, has become the go-to political mantra. The exposure of the warp and woof of our society leads one to question how and why we do things, from how we move people to how we bury them; our political system and the reasoning behind policies which appear to fail. The fact is that we are broke not only in pocket but, crucially so, in ideas. Whilst disturbing, these are also interesting times. A few of the markers of where we find our schools are-

The obvious and easy solutions are to raise more taxes or to borrow more money – the latter becoming increasingly difficult. The first has already raised its head in that a once off wealth tax is again on the cards, with pundits estimating that this can arise R160bn – a seemingly easy solution but hardly repeatable if the gain is squandered. The difficulty with raising wealth taxes is that those who are targeted already pay the general equivalent of what is colloquially termed a black tax (financial support that black professionals are expected to give to their extended families). Consider this: those who can pay for water and electricity and support others who cannot or will not pay; those who can, will over-pay for CV19 vaccine to fund those who cannot. Essentially, these are taxes imposed on the wealthy for the privilege of staying in a poor country.

On a wider scale, Africa requires help and asks this of other nations (lately by calling for a reduction in the price of CV19 vaccines – specifically for Africa). One may legitimately ask why one person is obliged to assist another and why one nation should fund another? Theories abound, but I have not been able to find any theory that supports such conduct other than essentially self-interest. Much fun, however, may be had, if this interests you: try, for instance, listening to the following pod cast by a Yale professor on Malthusian economics (45 min!) https://podcasts.apple.com/us/podcast/02-thomas-malthus-and-inevitable-poverty/id431187212?i=1000092883386

You could also try searching why are people poor – there is a range of reasons that present themselves which, I suspect, allows one to pick according to one’s political and world view. Those in need of help would argue that man is a social animal and that we are predisposed to hold society together; those who would be called upon to give such assistance might point out that poverty is self induced, is the result of bad choices and so on. On a local level, one might ask why one should train up a competitor or a BEE enabler.

All of which is educational but hardly presents a single valid solution.

A sop of sorts is news that in terms of purchasing power (Big Mac Index), our Rand should trade at R5.92 to the US dollar; at once an indication of how others view us and providing a reason why one would want to stay here. Yet, increasingly, those who can are leaving our country or dysfunctional centra, evidenced by an exodus of the able and a rash of second-passport applications.

Vaccination of all would halt the CV19 pandemic in its tracks and is probably cheaper than the cost of lockdown and loss of life. The swirling debate on the topic is focused on laying blame rather than looking forward. The burning questions are s who will pay for the vaccine roll-out and why the state should control this. After all, why should I not be able to privately source a vaccine – it is nobody’s business what I pay for such a shot and when I get it. A part-answer to this is that the state would want to guarantee my purchase for my own good (as it would sanction the use of any other drug in South Africa), but an increasingly plausible answer is that the state needs able buyers to subsidise others (tax). So, why would you not, on your next business trip, buy the vaccine elsewhere rather than wait for it arrive locally? The cost of a shot vaccine is in the order of a few dollars which, together with administration and transport costs would result in a price range of R200 to R1000 a shot. A snip if you can afford it. In this case, subsidising others to ensure your own health might well make sense?

Much of the property news is old hat:

Much more interesting are the following:

A raft of interesting but useless information has presented itself over the past two months:

More topical are the following:

You might also wish to look at the recognition of Muslim marriages at https://www.africa-legal.com/news-detail/muslim-marriages-recognised/

Go with mean people and you think life is meant. Then read Plutarch and the world is a proud place.

Son Who Knows Everything had me wade through Diamond’s Collapse: essentially a treatise on four factors which cause the collapse of a society and what successful societies do prevent this. One ends up thinking about sustainability and how to achieve this. This, in turn, let me to issues of sustainability and I refer you to a talk on the topic by Mann: https://www.ted.com/talks/charles_c_mann_how_will_we_survive_when_the_population_hits_10_billion

This, in turn led me to wonder about the sustainability of democracy in Africa (as an aside, a commentator had suggested that the ANC needs a sustainable model of wealth extraction!). I suspect that the adoption of democracy in Africa served as a vehicle to shift the control of African societies from the then colonial masters to local societies which would aspire to similar political control. The question is whether African nations which could, in terms of sophistication and cohesion, emulate those who had controlled them. Would democracy be a sustainable political system in African society, given that its diverse societies were and are ill-suited to taking sophisticated decisions when compared to the much more homogeneous Athenian society which gave birth to such rule? Democracy is certainly not a quick fix for the ills of colonialism and not necessarily suited to African society.

Some years back I bemoaned the level of corruption in South Africa to a Croat friend. He was quick to point out that corruption is a human condition and not limited to Africa: he said that the liberation party in Croatia had, like South Africa, traded on its liberation status to loot those led in favour of the liberators. Really good to know!

More to the point, how does one stop corruption in Africa? A part-answer is given in the following talk by Magatte Wade (not the best I have listened to but the point is well made) in which she holds that one needs to make it easy to do things which will prevent others from capitalising (in the sense of facilitating at the cost of a backhand) on that constraint: https://www.ted.com/talks/magatte_wade_why_it_s_too_hard_to_start_a_business_in_africa_and_how_to_change_it#t-494184

CRT: Critical Race Theory. Pres Biden is punted as giving increasing emphasis to CRT, which is described as an anti-capitalist ideology that mobilises around racial identity to polarise and divide, exaggerate the importance of racism and blaming white supremacy for all black-white disparities (if you are presumably right-leaning). Whatever: the fact is that his reign will probably usher in an era of increased redress.

On the topic of redress/BEE, the SA Institute of Race Relations, described in Wikipedia as one of the oldest liberal institutions in South Africa, has weighed in quite dramatically against BEE and is worth looking at: https://irr.org.za/media/chilling-assessment-bee-has-de-industrialised-sa-pushed-it-backwards-in-time-biznews

I confess to having been quite surprised as the sentiments expressed there are scathing on the implementation of that system in South Africa. Worth debating but, speaking for myself, I shall hold my head firmly below the parapet on this!

What’s the difference between a good secretary and a personal secretary?

(Okay, okay I’ll behave myself! I did, once, have a secretary as fierce as that in the cartoon below – but, for some reason, humorous secretarial stories don’t exist – they all seem to nudge the boundaries of respectability.) 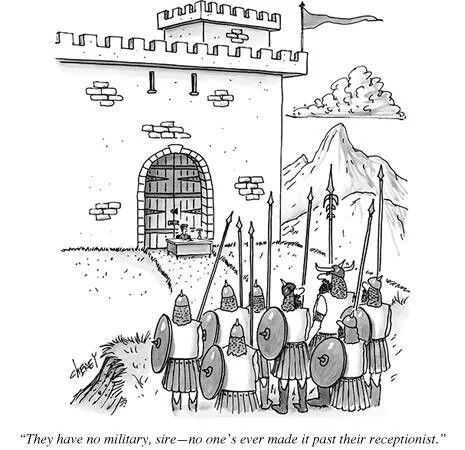