I don’t believe we have an economic or financial problem in South Africa. We have a political problem. Dawie Rood

‘Potamus rising: the world debt is, on average 100% of world GDP. Ours sits at 81% of our GDP. Better than many, but, when we are spending 21% of our income on interest, then we should be concerned. If we were to compare this to an individual, such a debt repayment level is not unusual; provided that the capital was used to buy an asset. The move, nay, promise to move to greater infrastructural spending in South Africa is truly good news, as such spend is worth more, economically speaking, than, for instance, the some 60% of our GDP spent on social and health matters. See https://www.economicsonline.co.uk/Managing_the_economy/The_multiplier_effect.html

It is said that a percentage rise/drop in GDP growth/loss equates roughly to a percentage in job growth/losses in our economy. If remotely true, at our growth rate, we will never reach full employment in this country.

So, would you invest here? My understanding from a talk-show, is that it is only South Africa’s external rating that has dropped to junk status – our internal rating is still at A-level. I sought to follow this up and this take on our economic situation is certainly not mainstream. From an investment point of view, pension funds must still invest some 70% into government bonds (which are presumably what the author was referring to) and local stocks. The problem with our declining exchange rate is that the number of overseas stocks that may be held by a pension fund, relative to internal investments, keeps on declining as our currency devalues, pushing more local funds into local investments. In South African money/value the ratio stays the same but in terms of overseas value, what you hold there drops quite radically as our currency devalues. The effect of such a growing investment in an economy which, seen from outside, is not that great,  pushes up the risk that your investment is exposed to. Think Zim.

I received a note on the future probability of world economic performance from PPS: it provides for bear (10% probability), base (60%) and bull (30%) scenarios. The base scenario, at 60% probability, holds that the world economy will stabilise over the next 12 – 18 months, South Africa returns to normality in the second half of next year and we end up with an inflation range of 2 – 8% over the next 5 years. Interestingly cash investments are predicted to deliver an inflation return of -4 to 4% whilst shares should deliver 9 – 16% return over the next 10 years. The Rand is predicted to depreciate at a rate of, at most, 5% per annum.

“By paying out on these claims, insurers have the ability to save jobs, but instead we see them hiding behind their lawyers, while the industry bleeds.”

(if your company is struggling to pay salaries and pension contributions, do take a look at the FSCA communication 11/2020) https://www.fsca.co.za/Regulatory%20Frameworks/Temp/FSCA%20COMMUNICATION%2011%20OF%202020%20(RF).pdf

Much ado has been made of insurers balking at paying for business interruption losses owing to CV19. The issue is headed to our High Court and most insurers would be holding their breath on this issue. There’s one exception though: Outsurance has opted to pay out. Give that bunch a Bells!

Why are some paid more than others for doing the same job? The least popular explanation is that we are able to measure productivity better than before and reward just that: https://www.nber.org/papers/w27390.pdf  (highbrow only)

Dubai will accept incoming travellers from July, provided that they produce a CV19 test certificate no older than 96 hours and medical insurance. Sounds great but isn’t; you need to book, pay and bet that you will not be ill and that your test will be out in time.

Be wary of repeatedly renewing fixed-term contract as you will end up with a permanent employee: https://www.golegal.co.za/work-fixed-term-contract/

Many of us will receive auto-assessments of our income tax from SARS: my initial reaction was that I would not want to be involved in assessing myself (temptation beckons) but discovered on investigation that this referrs to machine-assessment.

Pooled testing: the US have taken to pooling samples from 5 – 10 persons and, if that tests positive, testing the individuals. Faster and cheaper.

This is not new, but still: House prices are currently 12% down on June last year and the predicted commercial property price-drop in the next year is expected to be 10 – 20%. What is interesting is that the move away from office space is placing pressure on residential purchases in the sense that houses must, in future, be structured so that one can work from home. Furthermore, the property price-drop is such that it is again becoming more cost-effective to purchase than to rent: this in turn affects buy-to-let purchases.

Not a land grab: occupation of properties by would-be “owners” is explained by the invaders, claiming that they take back what belongs to them anyway. It would be interesting to examine the underlying sentiment: does this hark back to pre-feudal concepts of ownership or is this simply a rationalisation for either taking what is not theirs or is this an expression of economic helplessness?

The RAF squabble with its own lawyers continues: an eventual dead horse, given RABS? I had assumed the unaffordability of RABS had resulted in its implementation being ahem, postponed? A colleauge sent me a report of the portfolio committee on transport dated 2 June and, from clause 6.3 thereof, it is clear that this transformation (from a liability insurance scheme to a system based on Social Security principles) is still in the running. On his recommendation I spoke to Kirsty Haslam, an expert practitioner on the forefront of the push-back against RABS. The history of this bill is that the second reading of the bill in Parliament had to be abandoned thrice and that the 2019 elections delayed it further. On the face of the report, the intent behind the system is laudable but probably incapable of being implemented – at least with the infrastructure and funding we currently have. The state attorney will be roped in – which appears sensible unless one has dealt with that institution – dead from the knees up. Furthermore, even on state calculations, the current fuel levy is not nearly enough to fund the new scheme – which scheme will be brought under the umbrella of Social Security.

Give those guys a Bells! Geyser & Coetzee sorted out that long-standing group action by pensioners against the Transnet Pension fund. The pensioners involved will be compensated for past losses and so on and given a reasonable increase with the passage of time. Transnet should be ashamed of itself – but, of course, isn’t.

The following are notables on which one should not spend time unless interested:

“Live your life by a compass, not a clock.”

That’s not a chip on my shoulder. That’s your foot on my neck. – Malcolm X

The brouhaha under the BLM flag has drawn a great deal of comment. Whatever the true cause, the mere fact of its worldwide resonance should be reason enough for the cause to be addressed. Especially worrying is the cancel culture (let’s wipe out history) that accompanies the somewhat randomly chosen destruction of symbols of oppression. How are these actions different from the tearing down of remains of prior civilisations?

Black students at Oxford who feel traumatised by the killing of George Floyd will be able to apply for a reduction of workload and special consideration in their exams. Really? There are thousands of films, news articles and similar out there which portray mass killing in fiction and fact, yet this event, specifically, entitles them to special consideration? Rage at discrimination I understand, trauma at the death of someone one doesn’t know, is BS.

Sipping my already-warm Corona and watching the world go by, I thought how I once imagined – and to an extent, perhaps we all do – how traveling to faraway places and seeing extraordinary things would perhaps make me a little extraordinary, too. How the kindness of strangers and the awe of seeing the Andes for the first time, the melancholy of those long long trains in Nebraska and the loneliness of the Atacama Desert, the beauty of the turning leaves in the Rocky Mountains and the blossoming almond trees in Granada, the wisdom of old women in the forgotten Bolivian villages and the simple truths of cattle ranchers in New Mexico, the pure wonder of sunrises at the edge of the world in Tierra del Fuego and the stillness of the pristine glacier lakes in Chilean Patagonia would somehow rub off on me, leaving me in a perpetual state of wonder, making me a little wiser, a little better, and that in the end I would understand something very important and carry it with me. Biker

Alarming events, shocking news and so on detracts one from the truth that there is much to be celebrated in everyday life. Do take a look at this inspiring talk: a gopher Aryan https://www.youtube.com/watch?v=gD_1Eh6rqf8&feature=youtu.be

Gut-wrenching commitment: a week and a half ago a husband walked into a pyre of burning fuel off the tanker that killed his wife. Whatever your take on this: that man was committed.

Commitment on an entirely different level: Msholozi risking his life to attend court this week – blah!

Well, she’s not really my girlfriend…

What do you call a woman that tries to force you into commitment?

Of course, so does insanity. 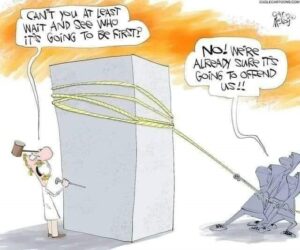