My faith in humankind was reaffirmed when the Treaury announced that, of sin taxes, the greatest sum lost would be owing to the drop in beer sales. At last, beer takes its rightful place!

A colleague; a minor property mogul, had, some years back, suggested that a single-hit wealth tax should be levied from the wealthy as atonement for past sin whereafter the book on this would be closed. This avenue is again in the news: three academics have called for the richest 354 000 SA taxpayers to be so taxed, stating that this would raise some R143bn, which comes in at some R400,000 each. Whilst the proposal has merit, I cannot think that this would make that much long-term difference. This is not even a third of what the State wants to throw at the problem. If the top tax rate is increased, there is the perpetual threat that some of our wealthy citizens would leave; really? By way of comparison, the maximum income tax rate, when I started practice, was 50%.

Allan Grey estimates that it will take at least 2 years post CV to get back to what our markets were like at the end of last year.

It is reported (the Dispatch) that the state has made provision (probably under the auspices of a retired judge) for mediation, on a no fee basis, in matters where citizens mount challenges relating to CV issues, against the State. Think, by way of example, our tourism department being taken on for insisting on BEE compliance in order to receive relief funding.

An interesting aside to the sudden rush by all to have their businesses declared as essential, is the spat between online traders and minister Patel: he rejected requests by online traders to allow unfettered e-commerce in South Africa, saying that, if he did so, it would be unfair to some; a seriously questionable decision. We have some who would grasp the opportunity to modernise, yet others hold back – why should they be protected?

Kulula expects to return to the skies, at best, only in October.

Edcon, on the ropes, holds around 1,000,000 m² of retail space in our larger malls. If its business rescue is not successful, its liquidation will have quite an impact on major landlords.

Our Attorney General has given the assurance that it would monitor the CV relief spend and ensure that the monies end up in the right hands. Great: if it was not able to prevent other corruption, will it do better this time?

Moneyweb suggests that RSA Retail Bonds should be invested in as they pay 11.5% per annum over five years. Reinvestment of the proceeds result in an effective rate at 14.4%.

Few of us, who travel, would have escaped the promised-refund-morphed-into-voucher from SAA. SAA finds itself in good company; twelve EU members have asked for the suspension of the rules that airlines should offer full refunds for cancelled flights in favour of vouchers, in order to assist with cash flow.

I confess to being quite sceptical about both the state’s tax and UIF relief packages, as well as the pledge that banks have given to assist customers in good standing. As far as the latter is concerned, generally, customers in good standing should have no problem borrowing; it is the marginal guys who will probably be beyond rescue anyway. As regards the former, there are reportedly some 220,000 workers who are eligible (under the TERS scheme) to claim for salary benefits, but who will miss out because their employers have not applied for relief. Doing the paperwork is a serious pain in the ass . The UIF is not coping with the influx of applications and payments will be late. Lastly, the sum to be received is not nearly what you probably think it is – take a look: https://www.kznindustrialnews.co.za/news/warning-uif-salary-top-up-shortfall-shocker?

De Klerk predicts that, inasmuch as the FNB House Price Index had already lost momentum in the first quarter, we might have an avalanche of properties put on the market, post lockdown. First to go would be holiday homes, followed by a significant contraction in residential rent and concomitant property values.

Dr Golding ran an advertorial in the Mercury offering unlocking the residential property market (selling); property had long been held as a cornerstone against hard times – what has been demonstrated by the rental crisis we are facing, is that, as an asset class, property is as vulnerable to economic disasters as any other. Take the desperation displayed in the PI Group and the Clothing Retailer Group now calling for the State to mediate on shopping centre rentals. “For too long the tenant has been treated merely as a paycheck, resulting in a master-servant relationship.” Really? I believe this to be a symbiotic relationship with each holding cards that the other needs.

Last week I reported on a would-be affordable (el cheapo) letting agency: this week it is the turn of lang-arm property maintenance services: take a look: https://propertyprofessional.co.za/2020/04/23/proptech-makes-safe-property-management-possible/

The property sector has not been left behind in clamouring for bailouts: search for NPPC (National Property Practitioners Council) – an unfortunate moniker as this abbreviation is claimed by the National Pork Producers Council and the National Pigeon and Pest Control…

The Deeds Office will reopen this week and existing sales, where bonds have been dealt with, will probably be ready for registration – if rates certificates can be sourced.

Are you able to seek damages from  the the SAP if the police fails to prevent an unlawful occupation? I hold an article which deals with the difficulties involved in seeking damages against ASAP in such circumstances,written by Fick as part of her doctoral thesis: ask me for a copy

Nummawan has abandoned his appeal to the Concourt for leave to appeal against his failed attempt to have his criminal case struck off the roll. His attorney hints darkly that the real beneficiaries of the arms deal will be revealed: if this is the case, why did he, both as vice president and president, not do anything about this? Frankly, who cares who he implicates!

Some RAF panellists have reportedly lodged a complaint with the JSC that the judge (Davis J), who ruled against them in their bid to prevent the RAF from suspending their services, should not have presided over their application. Whilst it is true that the judge had met with the RAF a year ago, I am not convinced that this route is going to take them anywhere: at the glacial pace that the JSC deals with complaints, the issues at hand will have ceased to matter by the time that the complaint is still with.

Interest and the tax deduction when using borrowings to fund a practice – for younger practitioners: https://www.golegal.co.za/interest-tax-shield/

I confess to having had mixed feelings on this article; technically it is perfectly correct. The difficulty is of course that one must needs borrow in order to write interest off against income, which means that, in times like these, using money at a lower tax rate than one’s own may well be fine but if the income needed to service the loan is not forthcoming, you will certainly end up in difficulty.

If your husband to whom you are married in community of property, in his capacity as a trader, signs a surety (which you do not sign as this is technically not necessary), you are bound to that surety: https://stbb.co.za/wp-content/uploads/2020/04/stbb_plu09-2020_s2.pdf (courtesy of STBB)

STBB also ran an article on the difficulties one might encounter when attempting to disguise a transaction as something else. Interestingly, the issue of supervening possibility/vis major is dealt with in their note which is, in our current circumstances, worth a read. https://stbb.co.za/wp-content/uploads/2020/04/stbb_plu09-2020_s1.pdf

Tshwane is now able to issue rates clearance certificates via its e-Tshwane platform. If you wish to register, contact AnnemarieB@tshwane.gov.za

no you won’t believe in if any more

if is for children (Whittaker)

ROMO: the reality of missing out (Carmichael)

My younger son is a greenie of sorts, which perspective had led me to look at past accusations of Amazon deforestation. President Bolsanaro had swept aside international offers of assistance but seems to have come a full circle and will be sending in troops to enforce environmental laws. Schizophrenic.

Former Johannesburg mayor, Herman Mashaba has called for electoral reform on municipal level – I believe him to be right; municipal representatives should be chosen in such a manner that politicians answer to the constituents and not their political parties.

Every community has that pain-in-the-ass impimpi (snitch) who publicly decries any lockdown transgression in the name of the greater good – a form of jackboot-licking-virtue-signalling that emphasises that person’s obedience to the lockdown. Yep, they need help.

I’ve been waiting for the perfect time to change my Netflix password so my ex can’t use it any more – it really doesn’t get much better than a national lockdown!

Before you complain to much – remember there is someone in quarantine with your ex!

Back in the day the only time we started panic buying was when the bartender yelled “last call”.

In these quarantine days we find new ways to communicate: a good example is my neighbour who got up at 7 AM this morning and started listening to very loud heavy metal music…

Whatever, he liked it or not! 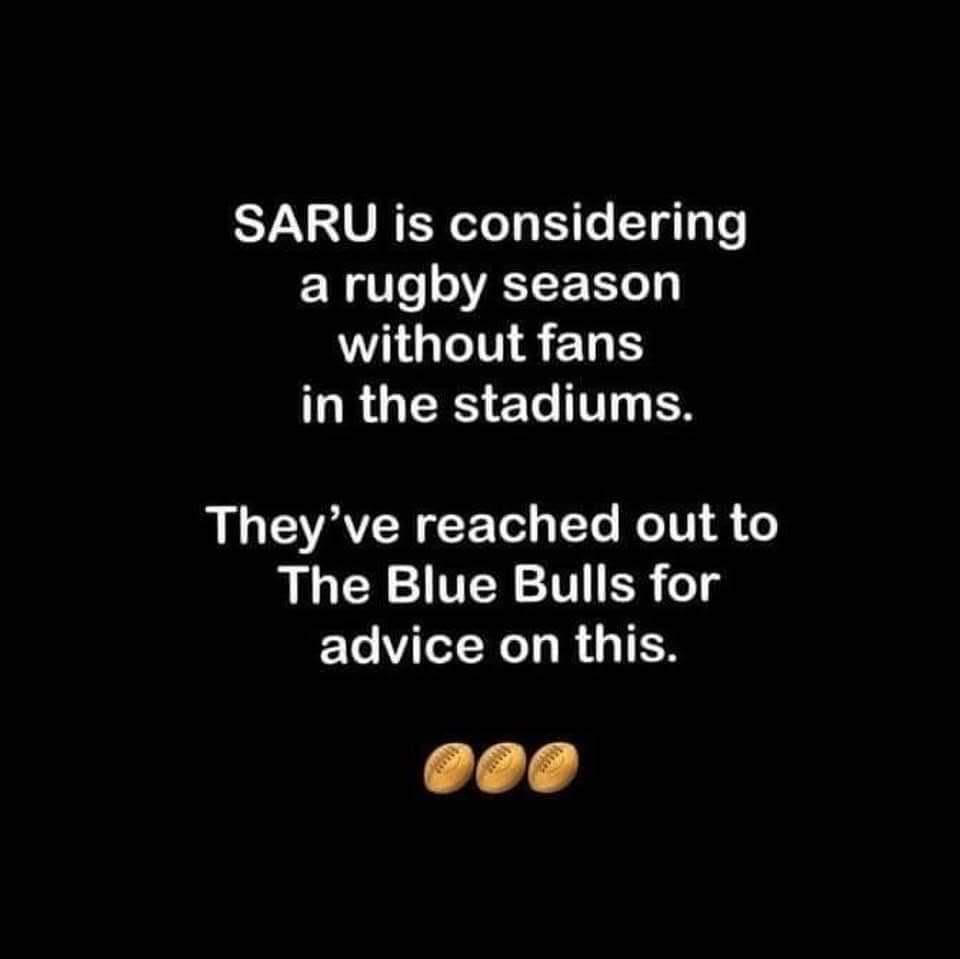