There’s not much new news on property affairs:

The basics (yawn): the IMF upped its estimate of our growth to 5% and BNP expects the Rand to strengthen towards year end. This is broadly in accordance with business expectation for the immediate future.

There are, despite the rosier outlook above, several basic constraints on South African business’ ability to grow – those recently in the news are:

Really broke? In KZN, 2000 educators’ posts cannot be filled, owing to budget cuts – severely impacting on the “quest to bring about equal, quality and relevant education for all”. At the same time, the Department of Basic Education has opened a recruitment drive aiming to provide 287,000 unemployed persons for placement in schools to enable them to become educational assistants. Put differently, you remove 2000 teachers, but you place, say, 40,000 assistants, in the same schools from which you have now removed teachers. Those who apply do not need a matric certificate. The blurb says that you must have the usual, i.e., communication skills, ability to work with people and, you must love this, “have an interest in academics”.

An oft used greeting for businessmen would be: so, how’s business? Judging by what was said above, not too bad, thank you. However, our business confidence index has been trending downwards over the past months as is retail sales.

Many years ago, I bit a dentist who was hurting me. I held on, got out of the chair and ran for it. On my return, a week later, there was a sjambok hanging over the back of the chair as I walked in. Injections were and is still often painful. There is now a promise of painless injections – take a look: https://www.iol.co.za/lifestyle/health/watch-scared-of-needles-newly-developed-virtually-painless-injection-hailed-as-a-breakthrough-195dc48a-33ac-5a7c-a893-2804792c2a45

Why would you buy from one supplier and not another? Sinek presents a compelling idea on persuading clients to support you, which is great if you have personal contact with a client or if you market really well. Look: https://www.ted.com/talks/simon_sinek_how_great_leaders_inspire_action?

“In its current form, legal knowledge is too exclusive, too expensive. This has to change … and the advocate’s place therein, needs to be streamlined and become more flexible on where and how advocates can practice.”

“It is clear that doing or saying unintelligent things is no barrier to political success.”

The end is nigh! Superman has come out as bisexual.

I immediately add that I am a supporter of gender equality and the LGBTQIAPD community. But, hell’s teeth,..Superman! Will Lois Lane be supplemented by Louis Lee? Incidentally, did you know that there are 72 genders? It would certainly take a superman to accommodate that lot.

Entitled? The difference between a benefit and an entitlement is that the former is an aid or an advantage while the latter is a right. For war veterans to feel that they are entitled to monetary compensation for services rendered 25 years ago is, mildly put, surprising.

The following statements made by politicians are beyond rationality – an indication of chutspah or idiocy?

The latter Idiocy reminds me of our preacher about building the nation in 1980, when there were no babies to baptise on the first of any month. He arrived at a friend’s house and asked when they would be starting a family: the answer was “now-now” – he left in a hurry.

“Two things are infinite: the universe and human stupidity; and I’m not sure about the universe.”

“In politics, stupidity is not a handicap.”

“You have attributed conditions to villainy that simply result from stupidity.” 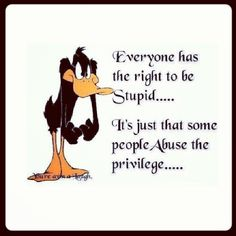