It would be fair to say a that South Africa was rescued from penury following on lockdown by the mining sector. On the face of it, the mining sector is flying: is this really so? A survey has placed us amongst the world’s ten most unattractive mining destinations. Why? Factually, what is underground in South Africa has been there since time immemorial, what has changed? The fact is that the clash between state ideology and mining pragmatism is very evident in the mining sector; politics has led to the rating above.

Digging deep? Looking at the following graph, it is clear that the surge in commodities is not owing to increased production but only owing to the increase in value of the minerals mined: had South Africa produced more, the benefit would have been much more apparent, but we cannot: we are constrained by our dysfunctional railway system, politics and the lack of electricity. When the values of minerals drop, as it must, this boom will be over. 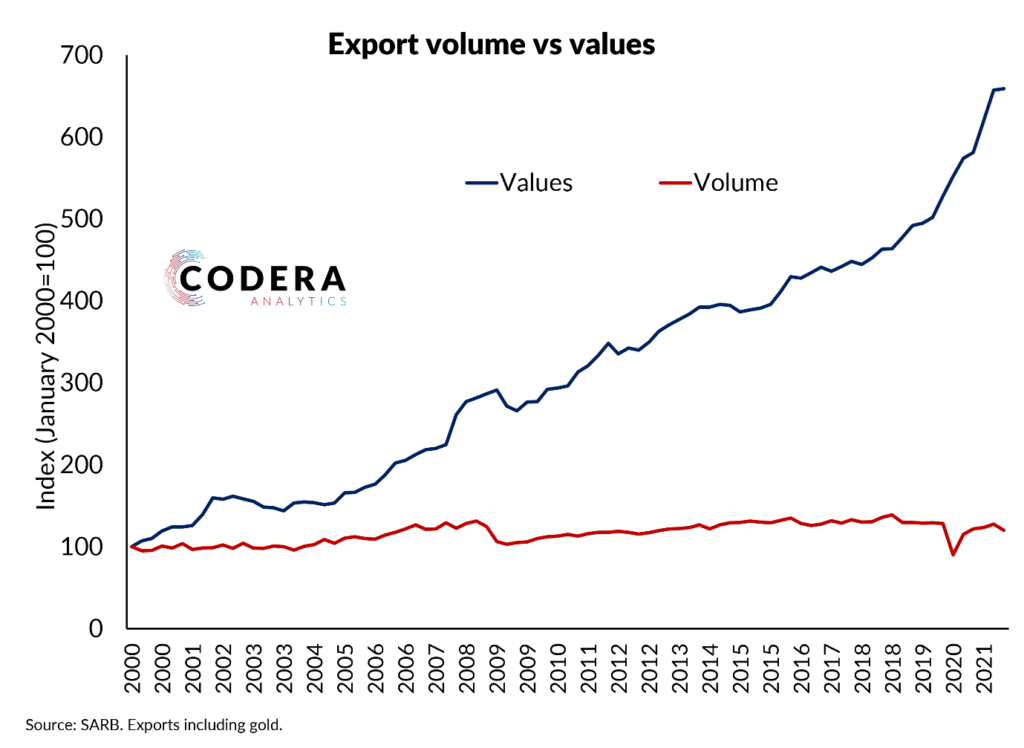 The following graph shows the difference between real and nominal GDP: simply put, real GDP is defined as the value of production whilst the nominal GDP represents the goods and services produced/rendered and includes inflation. The following graph is depressing but tells the actual story of what is happening in South Africa today: our real GDP is steadily declining; an indicator of an ebbing economy. 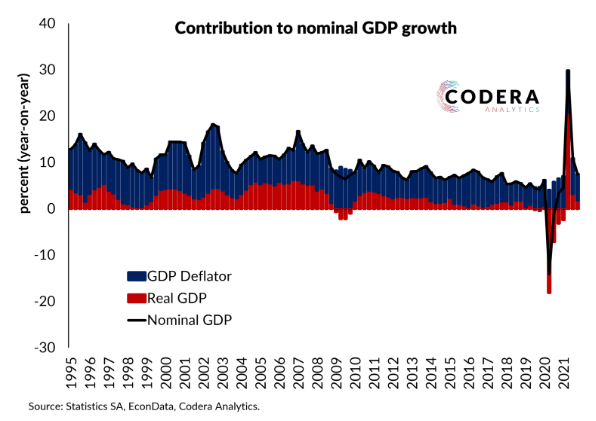 What I am trying to point out with the above two graphs is that, whilst there appears to be a short-term improvement in our economic affairs, this we are going nowhere.

Working from home/e-business assailed us over the past two years; is this all bad? Nick Bloom is a Harvard professor who published a finding that a mixed-work model is so positive that one can hardly ignore this: https://nbloom.people.stanford.edu/sites/g/files/sbiybj4746/f/berkeleyv5_0.pdf

Note the graphs following on the executive summary and the effect of WFH on rentals.

Businesstech published their rating for certain degrees and the following universities rank highest for these:

The Prez has said we need to prepare better for natural disasters: an acknowledgement of a state of being unprepared. Unpreparedness and a lack of maintenance has exacerbated what started off in KwaZulu-Natal as an Act of G*d.

There is not much report on, on the property front: Propertywheel published a note on levies which I would have thought is obvious, but still: https://propertywheel.co.za/2022/04/why-are-estate-levies-so-high/

The other note, in passing, again quite obvious, is that rising interest rates will impact upon the affordability of land and property purchases.

Businesstech published a note on e-visas which says that our Department of Home Affairs is striking e-visa deals with certain countries in order to make it easier to travel. Sure, we are talking China, India, Kenya, Nigeria and so on. I have little doubt that most Western countries have serious doubts as to the efficacy and trustworthiness of our system – as is evidenced by the hoops that I now have to jump through in order to get a Schengen visa.

Further on this somewhat dismal note: I applied for a new passport from Home Affairs and had reported on my travails on accessing that worthy institution. Home Affairs duly processed my application and, in under two weeks produced a passport. The problem was that I applied in Pietermaritzburg and the passport was sent by Home Affairs to FNB Cornubia, Durban. I drove there rather than argue. I arrived to find that node off-line and, despite my passport being there, I could not be given this as I needed my fingerprints scanned online. FNB/RMB won’t give out the number of the node, so one has to drive there to check in person whether the node is online. This is presumably to prevent the public from swamping the person involved with calls – yet I found the manager on a cell talking to friends. This is 230 kilometres of travel and 3 hours a shot which exercise will have to be repeated until I find that node functional. So much for private sector efficiency…

I found the suggestion, by Nummawan’s lawyers, that the perceived-to-be-unjust Concourt ruling against him was partly responsible for the July civil unrest, unsettling. The fact is that Mr Zuma’s lawyers have probed (or will probe) every possible legal and other avenue to avoid his trial. Resorting to suggestions by his legal team, that an adverse finding would cause unrest again, is his legal team attempting to sway our Concourt to not act against their client. If the possibility of causing unrest were the measure of culpability/punishment, the judgements of our courts will for ever be subject to whim.

“But what we are now seeing is that policymakers are coming to the realisation that these rises in inflation could become of a permanent nature. As a result, interest rates are normalising faster than was initially expected,”

A gentleman is simply a patient wolf.

Give a man a free hand and he’ll run it all over you.

A wife lasts only for the length of the marriage, but an ex-wife is there for the rest of your life.

I used to have a speech impediment, but we got divorced. 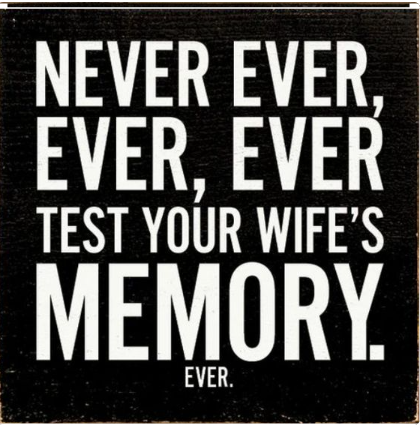