You will recall that growing our middle-class was a hot political topic some years back – the thinking was that “we” needed a substantial middle-class to ensure the retention of a democratic capitalist state. This week past there were mutterings of our having lost one third of our middle-class owing to CV19-related income-drop. I tried to find what was defined as middle-class – very little recent literature is freely available on what comprises our middle-class and, judging by the lower end figures, many bottom-end workers would full into that class. Hardly must-be capitalists!

One number? The South African PV industry chairperson says that our electricity crisis could be alleviated if the state changed its licensing requirements from 1 MW of power to 10 MWs. I had not understood this before but, I gather from an Eskom manager, that plugging into the net is not that simple: one problem is that those not licensed are not necessarily off-line when Eskom wishes to repair…many houses run 5KW systems which feed back into the grid which can result in a quite nasty surprise for those who repair these things.

When the state does it: the eThekwini spend, to house homeless persons for 100 days, in tents (to protect them from CV 19), amounted to R45k per person. You could have put these guys up in hotels for less.

Used-car inventories are up by 32%. A buyers market if ever there was one.

I have whinged on this topic before: with the rush to virtual, everyone and his dog is offering webinars to promote/retain business. The problem with these is that the offerors make the assumption that their target markets have nothing to do in working hours. The fact is that, whilst it would be nice to spend to hours of one’s working day on being educated, few of those who can afford such products, can afford taking that much time off work. If really worth watching, these should be recorded or offered after hours.

Mbalula on the topic of foreigners driving trucks: It cannot be given in our society to accept that our people are lazy and don’t want to do certain jobs. We must regulate. There are a number of problems with this statement:

Mr Mbalula’s problem is not new: the British imported indentured Indians as the locals were not willing to work in the sugarcane fields. No this was not necessarily forced upon those who came – taking on indentured labour was a common practice by the British at the time and was taken up by many; Irish- and Englishmen, for instance. were similarly dealt with in the West Indies.

Of more interest most of us: with inflation sitting at about 4%, pay rises, on average, have been cut by 20% to approximately 5.5%. One in five employers have frozen pay increases and bonuses. Half of businesses are planning staff cuts. When labour is plentiful and work is scarce, most employers would want to retain only their core staff.

Stakeholder capitalism (a recognition by leaders that customers, investors and employees all should have a say in the business) is punted as an imperative. I asked an opinion of a company specialist who described this as a happy thought…nice, but not real.

Fogging good? At the inception of our lockdown, a chemist explained to me that, in order to kill viruses on surfaces, one has to effectively wet the whole surface. Dry fogging simply does not work.

Naspers has been dogged by shareholder complaints about directors’ remuneration: one of the figures published this week was its daily out-of-town allowance of R62.5k per day to directors. Fairly generous don’t you think?

Mike Spencer, in Property Professional, bemoans restrictions placed upon developers by the CPA and POPI. In theory he may be right, but, without a shadow of doubt, that legislation is here to stay.

Standard Chartered Bank launched proceedings against the Land Bank for debts due to it. Chickens coming home to roost.

Property360 reports that Cape Town has been overthrown as the strongest South African property market in favour of, believe it or not, Mpumalanga; the latter sporting a 4.8% per annum price growth rate. Hardly mind blowing, at 0.8% above inflation.

It often happens that a sectional unit is transferred without its accompanying exclusive use area such as a garage. This is what happens and what to do: https://stbb.co.za/wp-content/uploads/2020/06/stbb_plu13-2020_s1.pdf

This is a very interesting case. W&A le Roux v C v Niekerk, Pretoria, not yet reported – ask me for a copy

Another interesting case dealt with the question of whether the prescription of a bond changes from 30 to 3 years after cancellation. It should be said that, in this case, the bank had claimed against the insolvent estate first and thereafter cancelled the bond. The court held that, at the time of claiming against the insolvent estate, the prescription period of 30 years was valid and would be maintained, despite the cancellation of the bond thereafter. Botha v Standard Bank, SCA, not reported – ask me for a copy

(both of the above courtesy of Allan West)

Be careful how you deal with breach notices: failure to comply with the notice clause is fatal.

A great, if heavy read, is an article by Prof Pienaar on rule-based exclusive use areas. Ask me for a copy.

Speaking of heavy reads: I hold an article by prof Sonnekus on the capacity of in community of property spouses to buy immovable property…  Ask me for a copy; but steel yourself (in Afrikaans).

The crusade against deeds registries which closed for days at a time, following CV 19 episodes is over. Next is the very dysfunctional Masters’ offices. These are the gatekeepers of especially deceased estate transactions and are unnecessarily slow.

It has been said that politics is the second oldest profession. I have learned that it bears a striking resemblance to the first.

Our two-hat Prez: Mr Ramaphoza is quite correct when he says that, as president, it is not his job to seek out and prosecute the corrupt. He cannot, however, escape that responsibility as the leading representative of the ANC. The official line, lately by word of Mr Zuma, appears to be that blaming the ANC for corruption is not okay.

The KZN ANC chief whip is quoted as having said: There is nothing untoward (on the appointment of Ms Gumede as MPL). I followed what has been a standard practice in the ANC caucus.

The above is exactly the problem: as ANC member and leader you are expected to hang together and reward those in line with appointments, irrespective of ability/suitability. That policy has brought South Africa to its knees.

So, yes, we do hold him, as representative of the ANC, responsible for those of its members, forwarded for positions of trust, by that party.

And honest politician is one who, when he is bought, will stay bought.

After the Guptas left, we nationalised corruption.

The real reason that we can’t have the Ten Commandments in a courthouse: You cannot post “Thou shalt not steal,” “Thou shalt not commit adultery,” and “Thou shalt not lie” in a building full of lawyers, judges, and politicians. It creates a hostile work environment. 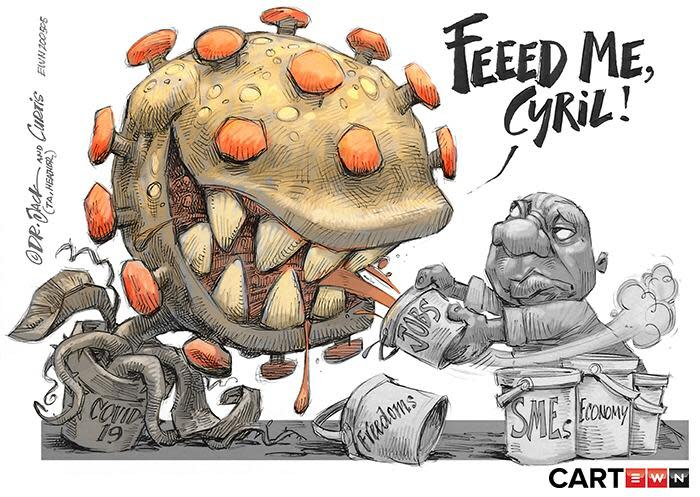