Mr Godongwana debunked the notion of using pension funds to bail out SOEs this week past. This pleased me immensely as, on checking, the only SOE that is making a profit, appears to be SAFCOL ; investing in trees is hardly a great pension move. The idea is that pension investments in infrastructure projects, which are profitable, would be allowed. Great idea. Managed by the state…mmm.

More on pension funds; Heystek (a once useful squash player, turned investor adviser and SA pessimist) published graphs in BT, showing that the JSE substantially under-performed, over the past three years, when measured against other indices such as NASDAQ, S&P, Dow Jones and so on. Whether you agree with his take on South Africa or not, what is true is that the South African Rand will weaken against at least the dollar and the euro over time. Holding external investments will probably give a reasonable return, in Rand terms in future – aside from making one sleep easier.

More on investments: a report by ASISA holds that South African investors put R88bn into local unit trusts, apparently, owing to their low volatility and inflation-beating performance (paradoxically, these have not performed well over the past years). Clearly the money is here – but what to do with it?

You will recall the somewhat acrimonious debate on BEE and mining: once a mine had given up 26% of its equity, was it necessary to top this percentage up if those who benefited, sold to non-BEE shareholders? It would appear that this dispute has not yet been settled but the consequences of dithering are clear: some 50,000 miners have lost jobs over the past 10 years. Capex has halved. Ten years ago, mining accounted for 17% of our GDP, whilst it is now 5%.

Where to get employed? The major recruiters of graduates, this year, have been in banking and finance. The median graduate starting salary, this year, for a graduate, is R220k pa. or R18k pm. Actuaries, quantitative analysts (whoever they are), lawyers, investment analysts and engineers averaged R350k pa. Of the above, only lawyers cannot do sums – the best example of this was a conveyancer who called me to ask about shares in property. A one third share was about to be transferred to two people and she asked what would be the share of each – I said a sixth: silence; she asked, how did I get to that?

Oh yes; candidates who started jobhunting well prior to graduation, were most likely to secure a position.

Business Maverick reports that the African Continental Free Trade Area zone will take off in January, owing to CV19-occasioned delays. This could be the world’s biggest free trade zone, by area, with a potential market of 1.2bn people.

Sanlam sliced R6.3bn of its market cap by “repositioning” with a view to establishing a black-owned asset management company. The intent is to boost its empowerment credentials and give it better access to institutional flows of cash.

A fun comparison on the costs of funerals, found that South Africa is the fourth most expensive country to get buried in – R26k on average. I suspect that this has more to do with the traditionss held by our majority, than the actual costs.

A Myboadband comparison of bottom-end banking accounts, shows that there is not much to choose between the banks, save that Capitec seemed to have nosed ahead.

Whilst on comparisons: BT published a review of our universities – ratings are based on medals won, publications and so on. Top of the pile is Wits, UCT, Stellenbosch, UP, KZN and North-West. I can claim personal or vicarious interaction with six of our top universities, and, in terms of functionality, I would rate North-West at the top with UCT definitely at the bottom.

Yawn: of more practical use to business people are the following:

altogether more fun, is a report on a multi-Mach, hypersonic (Mach 5+) propulsion system in development by Rolls-Royce https://www.flightglobal.com/air-transport/rolls-royce-deepens-partnership-with-reaction-engines-on-cooling-technology/139844.article

Are tall buildings on expensive mid-city properties an economic proposition or is it just ego: https://voxeu.org/article/economics-skyscrapers-synthesis

Commercial properties losing value: less so, apparently, green-certified offices, which held their value and have a significantly lower vacancy rate of 8%, as opposed to 11.5%.

IOL reports that there is a move to exempt certain public buildings from property rates. Examples are clinics, schools and public service buildings.

Home makers: Leadhome reports that women now constitute 58% of its buyer-enquiries and 55% of its seller-enquiries. About 50% of people making offers on homes are in their thirties.

This week past Moneyweb interviewed Rode: much was said, but what interested me was his prediction that our gradual decline in GDP, foreshadows a downward trend in house prices, even entering negative territory; the first such trend since the GFC.

Going after the big boys! Our wonderfully newsworthy JP Hlope, has accused CJ Mogoeng of his lacking integrity, on the latter reaching a decision that Hlope should face impeachment. Fun.

On a much more serious note (and our profession is serious) is that Parliament has binned RABS: after six years of debate, on the basis that it would have cost over R320bn to implement – more than the RAF’s current actuarial deficit. (See, it is not only lawyers that can’t do sums) So, what’s next? The fact is that the RAF, in its current form, is unsustainable.

Whilst on the topic of vehicle liability, is a write-up on Uber’s liability towards passengers outside of the RAF: https://www.iol.co.za/motoring/industry-news/can-injured-passengers-claim-damages-from-uber-legal-expert-weighs-in-55304c2c-f62c-416c-b7a1-c3fd8d694dd7

Two hoary but, for new practitioners, noteworthy items on trust majority and the in duplum rule may be found at:

Rental claims: if you have sued for arrear rentals, can you again claim for future losses? https://stbb.co.za/wp-content/uploads/2020/08/stbb_plu18-2020_s1.pdf

Can one bind shareholders to vote in a certain way at a general meeting? Unfortunately our SCA did not finally pronounce on this owing to the issue having become moot (courtesy of advocate Crots): http://www.saflii.org.za/za/cases/ZASCA/2020/95.html

The Deeds Registries Regulations and Sectional Titles Regulations have been amended. You need to look this up. https://archive.opengazettes.org.za/archive/ZA/2020/government-gazette-ZA-vol-662-no-43614-regulation-gazette-dated-2020-08-14.pdf

CRC 2/2020 imposes a R200 fee for withdrawing a deed from lodgement at any deeds office. “Test” runs are now more expensive aside from being verboten…

The Chief Master issued directive 1/2020: this deals with advertisements in non-print papers which are not published on the same day as the Gazette. Ask me for a copy.

Can you compel the opposition to make use of a virtual trial to avoid delay? http://www.saflii.org.za/za/cases/ZAKZDHC/2020/30.html

Bias: two interesting examples of bias presented themselves this week:

As their plane is going down, the woman turns to the man next to her. “Make me a woman before I die,” she says. He takes off all his clothes, hands them to her and says, “Fold these.”

What do you do when your dishwasher stops working? You hit her.

What do you call a man with 99% of his brain missing?

What did God say after creating man?

I can do better.

I collected a lot of data trying to disprove confirmation bias.

The results were exactly what I expected.

So: why and how do we laugh? 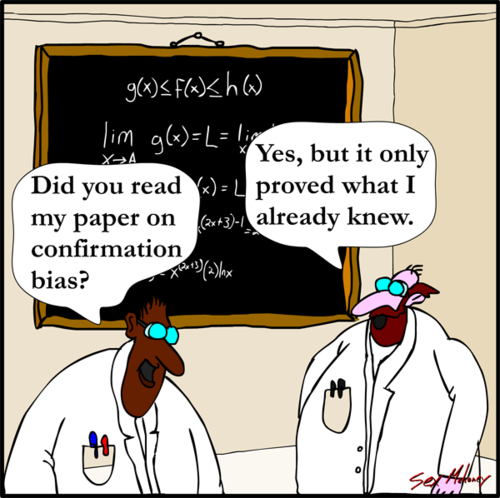