The value of the Rand, to some extent, reflects how others see us. For years the Big Mac index has been the laymans rule of thumb to the purchasing power of our currency. That index currently holds that a big Mac costs 55% less here than in the US. Who, at our age, eats hamburgers? Think beer: 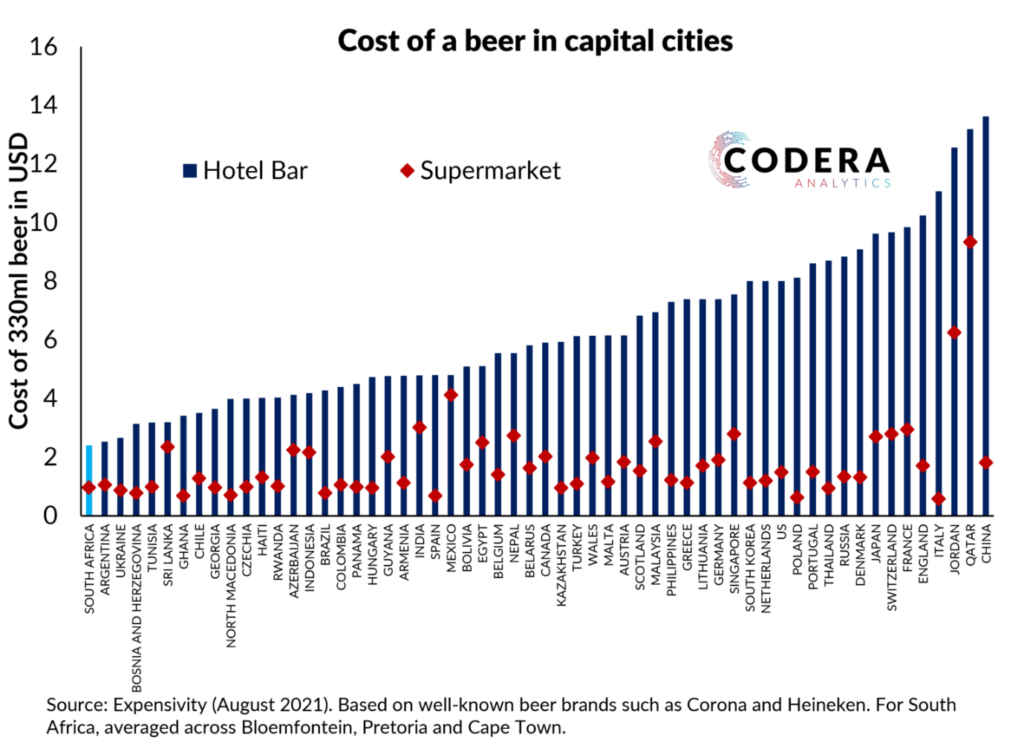 Ready to govern – do you remember the slogan; it was optimistic. This week it was reported that the Departmenst of Health, Education, Housing and Public Works had flunked last year’s audits; Telkom is on the ropes. The reason for all this is simply that there is no real accountability when a state leader does not make the cut. In the private sector, shareholders (I am not talking family-owned entities) would punish those who fall short of what is expected. Voters simply don’t do this in South Africa.

Another telling graph, employed by SARS to show taxable income statistics, is interesting for another reason; taxpayer numbers – take a look:

Essentially this says that we have just short of 5m taxpayers in this country. The fact is that we have too few taxpayers and consequently a too small income for what needs to be done.

When we then read of promises of major fixed income projects by the state, one cannot but doubt that these will transpire, especially given past performance on promises.

BS: Our Treasury announced that it was filling 67 strategic vacancies following on an exodus of senior employees: it says that filling the vacancy rate is a priority. A priority! They must be kidding: if this was a priority it would have been done long time ago. The decline of that bank is such that it had published only one (peer-reviewed) research discussion paper in the last two years (and 4 of the 5 authors of the paper worked for other institutions). This graph is available on the net – judge for yourself: 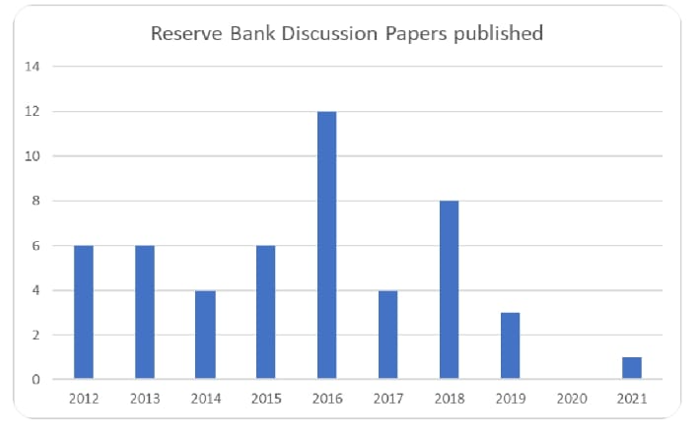 How does one increase the reach of one’s business? One way, especially for professionals, is to diversify one’s professional team rather than adding yes-men, after all, the more unique information you share the better the decision? The difficulty is managing such diverse teams. An answer of sorts is provided in this article: https://heterodoxacademy.org/blog/diversity-is-not-enough-why-collective-intelligence-requires-both-diversity-and-disagreement/

Hybrid models of doing business is all the rage, and a good thing too. What must one do as management to accommodate those who work thus? An answer, again of sorts, is to be found here: https://mitsloan.mit.edu/ideas-made-to-matter/4-things-to-consider-when-managing-a-hybrid-workforce

We are all encouraged to invest in retirement and the like. The finance industry must be doing well and, it now turns out that it is: apparently salaries in finance have been going up faster than in other industries. Workers in that sector are reportedly not more talented than of yore, but are better paid as a result of higher finance industry profits.

The farming industry is on the up and up – take a look (and look around on that website also) : https://www.harvestsa.co.za/2021/12/20/sa-beef-industry-outlook-shows-promise-despite-challenges/

The primary downside of BEE is that it disqualifies many competitive and cost-effective businesses from contracting with the state and those joined at the hip with its acolytes, such as banks and so on. A new bill, the Employment Equity Amendment bill, if adopted, will exacerbate this situation. Attempts to avoid compliance has given rise to public procurement having become a cesspool of corruption (a term employed by Cosatu) and the result of that suggested legislation is that BEE firms may charge between 10 to 20% more on contacts, depending on the value.

TopAuto has provided an alternative to the AA driving cost calculator: https://drivingcost.topauto.co.za/

An substantial oil find, in the top-end of the Orange Basin in Namibia, suggests that oil may be found on our side of the border (in the sea?) also. The turn of sentiment against fossil fuels and the damage that may be wrought by exploration, may well be outweighed by the potential benefit to this country of finding oil within its boundaries. Imagine a petrol price which is a fraction of what it currently costs?

Property news (aside from that written by representatives as marketing) is thin:

The JSE belatedly disqualified two former AYO directors from holding the office of director for five years. The chairman of the company responded by saying that this was an anti-transformation tactic. We have seen such reactions before, and one’s knee-jerk reaction is that, when censured for being useless, a call to arms is quite transparent. As if being incompetent is a qualifier for transformation…

The broken windows theory holds that visible signs of crime, anti-social behaviour and civil disorder create an urban environment that encourages further crime and disorder. Taken another step further, would you employ someone who steals your pencils? If one is not to be trusted in small things, can you be trusted with bigger things? For those so inclined, read Luke 16:10 – 14. South Africans are faced with this situation daily: I’m told that some 40% of electricity, supplied within KZN, is stolen. At some distribution points, the theft rate of electricity is in excess of 90%, which means that most of the inhabitants of the township, supplied from that distribution point, steal electricity. If the first two lines above hold any water, then ours is a profoundly dysfunctional and dishonest society. One could probably argue that the reason why Mr Zuma is still supported by such a large proportion of our society is that Mr Zuma’s supporters see nothing wrong in what must now be virtually certain was the loss of some R50bn to what is delightfully referred to as state capture. Take Mr Niehaus, a prime Zuma apologist, as example – he can simply not acknowledge the lawlessness that took root in the Mr Zuma’s reign. If one considers Mr Niehaus’ somewhat chequered history with debt and fraud, and taking into account the above, his take is understandable.

A nation of sheep will beget a government of wolves.

Did you know that you hamburger comes with a dose of misogyny? Definitely: https://www.youtube.com/watch?v=j6NP-nIYR24

“In his job my dad’s never lost a case. That makes him Gatwick’s top baggage handler.”

What’s the difference between Politicians and Thieves?

Thief: They steal your money then run.

Politician: They run and then steal your money.

Why do Americans choose from just two people to run for president and 50 for Miss America? 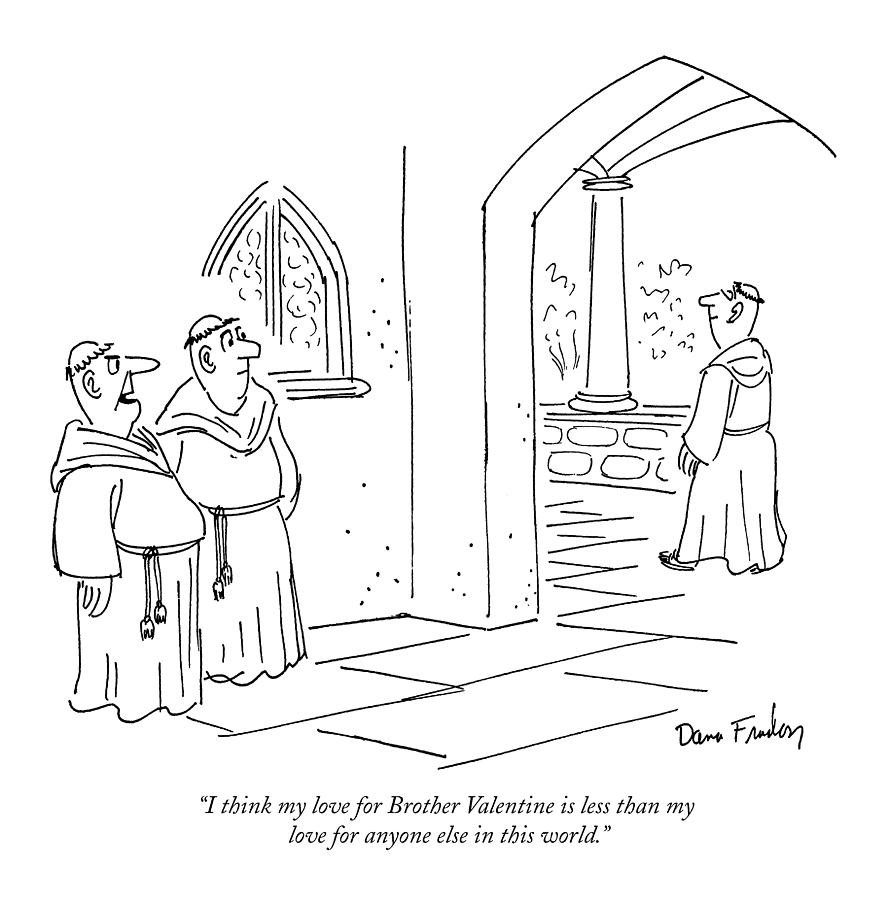