Progress: is unlocking embedded power generation not perhaps a catastrophe? Much has been made of the surprise move to increase the generation threshold for companies without a licence from 1 MW to 100 MW, holding that this would unlock investment and growth, as if our state will progress thus. The fact is that private power generation costs more than buying power from a utility and that the only progress that has been made is a recognition that Eskom is simply not up to the challenge. The fact is that big industry needs reliable power, which simply is not forthcoming, the need of which was foreseen many years ago, but not provided for.

Similarly, lack of service delivery at municipal level, has become a threat to business and plans to remedy this come from the private sector and not our state.  Cogta mouths platitudes of being on the cusp of local government that works better for the people but delivers little other than promises. A report that Sisulu will be holding water and sanitation officials to account for retrospective lapses, will not solve the problem of providing for the future. Our courts have already intervened and are set to intervene further, as may be seen from a ten-day old report that the appointment of a parallel authority is sought to take control of electricity and water revenue at municipal level in the North West, as well as the latest application against the Lekwa Local municipality by Astral Foods. Whilst officials talk about having learnt lessons, citizenry is coming to the rescue.

When finding a partner for SAA was first mooted, our state was looking for a junior partner. It now has a majority shareholder in that the Takatso Consortium, an entity that may have strong links to ANC, has been gifted a potential 51% share (and there is already talk that the state will settle for no less than 33%) in an airline for an investment of a paltry R3bn, whilst the government retains responsibility for the SAA debt. Consider this: a new 747 costs in the region of R6bn –a bargain for this investor? Possibly not, our state has jumped the gun by declaring Takatso as the preferred strategic partner, but Takatso has yet to do a due diligence to see whether its investment will pay off. Bluntly, a giveaway; surrendering control to the private sector. But, wait, there is more: now there is talk of listing, which means that the SAA will be funded by the public and that its partners will make a packet.

You will recall Bank Zero and Thyme Bank appearing on the banking scene very recently. The latest kid on the banking block is YWBN Mutual Bank – whilst PC, any bank that leads on a promise “to lend to small businesses who are forced to close shop due to lack of access to financing” may not necessarily be a great investment?

Tax: two permanent tax-generating schemes are in the offing in South Africa: a permanent basic income grant and NHI. Regarding poverty, a BusinessTech article held that some 36m individuals benefited from the recent Covid19 Basic Income Grant, which was, at best, a slim offering but which illustrated the need for such a grant. Both the Basic Income Grant and the NHI will strain our tax base. The question that must arise as how, in the light of our government’s promise to cut spending, these will be implemented.

Can you do well by doing good? PwC reported that mining companies, having high Environmental, Social and Governance (ESG) ratings, outperform the broader market. Do such practices really add value for companies and investors? Wierzyska says that such policies as a marketing ploy rather than productive of return. Judging by a quick Internet look, she is probably correct.

Two years back, the Competition Amendment Act brought public interest concerns (think BEE in this context) into existence insofar as that entity’s control of the market was concerned. This change resulted in the prohibition of a sale by the majority black shareholders of Burger King to an American entity having but 5% black ownership. The question that should be asked (Business Day) is whether compulsory black ownership should be encouraged over an encouragement to be black owned.

The Guidelines for Competition, issued by the Competition Commission, allows you to service your car at non-franchised workshops from the first of next month. The reason for this is that the service and maintenance provisions for in-warranty motor vehicles resulted in unfair allocation of work by insurers, restrictions on the sale of original spare parts and high barriers to entry that would exclude   the historically disadvantaged. Http://www.compcom.co.za/wp-content/uploads/2020/12/COMMISSION-ISSUES-FINAL-AUTOMOTIVE-AFTERMARKETS-GUIDELINES-2.pdf

Whilst on the topic of motor vehicles: IOL ran an article on the future of energy and fuel retail (think fuel forecourts) which painted a rather glum picture of this sector. The forecourt of the future will probably look remarkably different and those involved should consider this.

The MTI crypto scam last year roped in US $588m from 280,000 investors and was rated the world’s biggest crypto scam of 2020. The FSCA warned against the scheme in August yet subscription to the scheme more than quadrupled thereafter. Go South Africa!

The 9 best universities in South Africa are:

Auckland (New Zealand) has been found to be the best city in the world live in by The Economist. The least liveable city is Damascus and Harare makes it into the bottom 10.

What rules apply to sectional schemes? In October 2016 new rules came into effect but did not necessarily displace special rules. Read more at https://www.golegal.co.za/sectional-title-legislation/

Much has been made of a Pietermaritzburg court order declaring the Ingonyama Trust Board’s leases with residents who occupy its land, unlawful. The case had been brought by rural women saying that the contracts between them and the Board were unjust as those contracts forced them to pay for land that they had “owned” for decades. CASAC has weighed in on the issue stating that residents are the true and beneficial owners of the land and should be protected.

I spoke to the Trust’s attorneys who indicated that they would appeal – the matter is therefore certainly not settled.

The fact is that the Ingonyama Trust had been declared a quasi-organ of state some years back. It should be providing services to those who inhabit its land but logically would need a source of income to do so. At present, there are no formalities when building on Trust land and rates are not levied – a situation which is simply untenable given that services such as roads will have to be rendered to those who occupy in future. In one way or another, the Ingonyama Trust will have to tax/levy income from those who stay on its land.

A right royal mess: the unseemly brouhaha that erupted over King Zwelenthini’s will and estate interested me in that a clause was included which held that those of his wives, who challenged the will in court, would lose their share of the estate. I would be surprised if such a clause would be upheld as it ousts the power of courts to adjudicate.

We are making progress in resolving many of our challenges, from corruption to energy shortages to the obstacles that discourage investment. The pace of reform is picking up… We acknowledge our shortcomings as a government and are working to remedy them.

Politics is the gentle art of getting votes from the poor and campaign funds from the rich, by promising to protect each from the other.

What is the difference between the government and the Mafia? One of them is organized.

A contractor wanted to give a politician a sports car. The politician objected saying, “My basic sense of ethics would never permit me to accept a gift like that.” The contractor said, I quite understand. Suppose we do this: I’ll sell you the car for ten dollars.” The politician thought for a minute and said, “In that case I’ll take two.” 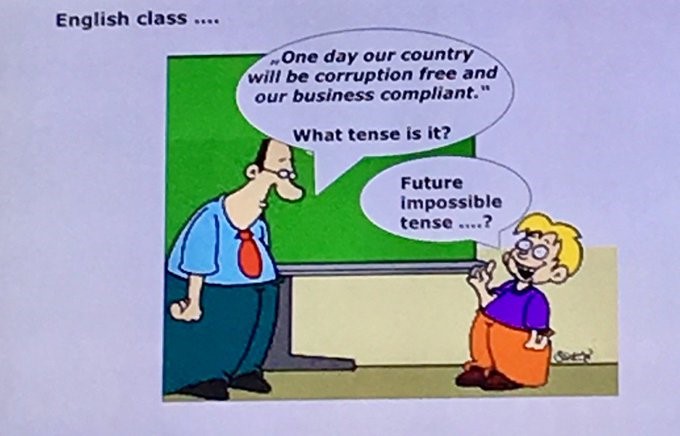