We have been immersed in Eskom woes for some 15 years and no decisive and thoughtful political initiative has been taken to sort out the problem. The problem is not just Eskom – the problem is our politicians.

The Bitcoin price varied from $10k to $60k and back to $20k over the past two years: an investment? No, more probably speculation.

R6bn has reportedly been set aside for the upgrading of six of our border posts. Sounds great, doesn’t it? In 2020 Raubex was awarded a contract for R2.4bn to upgrade the SA/Zim border post. That money has not made much difference and most of us would still avoid that border post if possible. The fact is that we have been having problems at our border posts, especially the Lebombo crossing, for many years. In the adequate border posts is an issue that should have been addressed many, many years ago and I confess that one cannot see R1bn per border post, making that much difference.

A report on West Coast exploration was heartening in that it shows the parcelling out of exploration rights in that area – do take a look: https://www.groundup.org.za/article/environmental-activists-reach-agreement-with-australian-mining-company/

A scathing report on the financial well-being and management of municipalities by the Attorney General has prompted a veritable tsunami of write-ups on the subject of potholes, failing wastewater disposal, and lately payment of employees by way of food vouchers issued by a bankrupt municipality. The fact is that there is and probably will be no political accountability for these failures. Until communities hold political parties to fatuous promises and political parties its own members to account, there will be no progress at all in the restoration of dependable services.

An oft recurring question is what form of enterprise a would-be entrepreneur might employ. The following article provides a brief write-up on the options available: https://www.moneyweb.co.za/financial-advisor-views/setting-up-a-business-what-to-consider-when-choosing-a-legal-entity/

A burning issue is the employment of foreigners to drive trucks in South Africa. It understandable that one would not want to give work visas to foreigners when locals are available with the necessary skills. The un-addressed question is why foreigners would be preferred over locals for such employment. One immediately suspects that foreigners are exploited in the sense that foreigners might work for less than locals would. A less palatable, but quite cogent reason, could be that employers would find a better educated foreigner working for the same price as lesser locals would.

Lately there have been repeated reports on the implementation of compulsory National Health replacing private health schemes. Whatever … in developed countries such as England and New Zealand in which National Health schemes operate, one has to wait for treatment. Here the wait for treatment will undoubtedly be longer and one cannot conceive of equivalent treatment being found in state hospitals. NHI is politically a great selling point for poorer voters but decidedly less so for those able to afford medical treatment; but then the poor is in the majority.

Lipstick index: Estée Lauder promoted this as an indicator of an increased spend on cosmetic products during recession. The insolvency of Revlon will affect practically every middle- and upper-class family in the world.

Short-term rentals (think Airbnb) are more profitable than long-term leases: the difficulty, in housing schemes, is that turnover in tenants can be disruptive to other occupants. The following write-up offers solutions to the issues that may arise: https://propertywheel.co.za/2022/06/short-term-rentals-in-housing-complexes-why-the-resistance/

Primum non nocere: with the release of prof, Davison, the topic of assisted self-death is firmly back on the table and in public view. The Hippocratic Oath is said to be one of the reasons why medical profession will not support self-death. I do not think that this is necessarily a valid argument and the opposition by the medical profession and the Department of Health to the legalisation of assisted suicide in appropriate circumstances, is beyond my understanding. Anyone who has experienced the suffering by many prior to death, cannot possibly support the opposition to assisted death, in appropriate circumstances.

“If a man has not discovered something that he will die for, he isn’t fit to live.”

A will is a dead giveaway.

A man on his death bed was speaking with his wife.

“Helen,” he said, “We’ve been through so much together. Do you remember when the shop burned down, and we lost everything of value we had in this world? We had to start over from nothing, but you were by my side.”

“Helen,” he continued, “when our son was killed in that terrible car accident, I was heartbroken. I didn’t think I could go on, but you were by my side.”

His wife began to softly cry, “I know, dear.”

“And now,” the man went on, “I’m about to leave this world. In my final moments, where are you?”

His wife sobbed, “Right here by your side, dear.”

“Helen,” the man said, “I’m beginning to think you might be bad luck.” 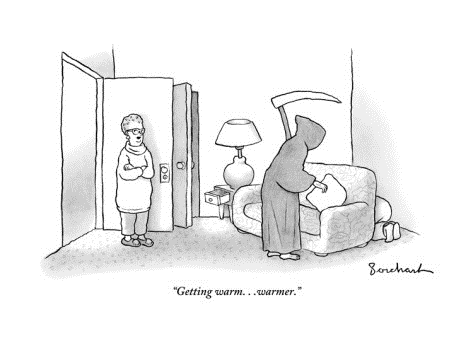