Topical news is a note on what will happen if Russia defaults on its debts? Exactly this happened in 1998 and interest rates shot up all around the world – ours hit 25%. The suggestion made was that Russia will probably default on its debts in the next month or so but , this time around the prediction is that the effect of that on us should be relatively modest.

More locally: news on government inflation compared to consumer inflation may be found at the following link: https://www.linkedin.com/posts/daan-steenkamp-48a42520_government-inflation-rates-activity-6908992561864966145-ckjT/?

An interesting note, that I came across holds that, globally, the number of ultra-high-net-worth individuals increased by 9% per annum, whilst in South Africa that number declined by 7% – the most pronounced worldwide – over the same period. Why? Perhaps this quote says it all: It is easier to come into SA as an illegal immigrant than as a scarce-skilled person. At the same time there is talk of a wealth tax in the offing.

A wag recently posted on WhatsApp that to be caught for drunken driving is a status symbol – it shows that you are able to afford a car, petrol and liquor! Our state is attempting to extend the availability of a driver’s licenses to all by introducing a means to exit our education system with a learner drivers licence. At the same time it is engaged in a systemic challenge in that it cannot renew ordinary drivers licenses owing to challenges. The fact is that one would do better by improving the standard of education rather than to add luxuries most would never use.

Our transport Minister said that 20% of Prasa employees are ghost workers: great; why could our previous minister and, in fact, the board of Prasa not work this out earlier?

An interesting note, on the Eskom site, reports that the Supreme Court of Appeal had held that a municipality is not entitled to receive electricity without paying for it – an obvious statement, one would think. In essence, a municipality cannot claim electricity but hold that it is unable to pay for it: http://www.saflii.org.za/za/cases/ZASCA/2022/26.html

We are painfully aware that governance at local level has slumped to an all-time low. A recent report held that one third of all municipalities could not provide a reliable water supply to its consumers. Another (Aseda at a webinar hosted by SAICE) said that R1 trillion would be needed to repair, replace and restore our water infrastructure. An eye-watering estimate – indicative of the mal-governance foisted upon South Africans in the name of politics. The result of this is highlighted by another article noting that companies are abandoning malfunctioning municipal areas. The fact is that our civil service has become politicised in the interest of only politicians – all of us would much rather prefer a professional governing local affairs than a politician.
Similar rot underlies a recent note in the Mercury saying that Durban should ready itself for more heavy freight on its roads owing to port expansion – good news on the face of it. Unfortunately, the reason for this problem is that Transnet is unable to provide the transport services required for a properly functioning port and the result can be seen in increasingly potholed roads.
Even COSATU has jumped on the bandwagon by fixing attention on the dire consequences of our government failing to fix local government structures.
The fact is that governance failure is visible and disturbing.

Pledges have, of late, been made that the red tape, strangling investment and business in South Africa, will be dealt with. The following graph deals with this issue: 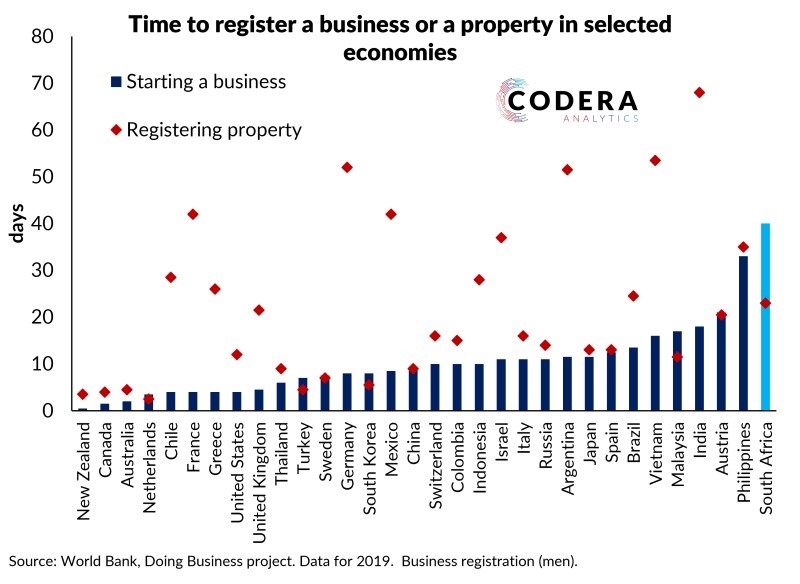 More on business:
• Webber Wentzel published a note on corporate sustainability which larger companies might well take note of as the requirements set out are to become the norm in the global economy. Do take a look: https://www.webberwentzel.com/News/Pages/eu-proposed-directive-for-corporate-sustainability-due-diligence-unpacking-the-impact-for-sa-businesses.aspx
• Much more contentious is a note on building trust in a team: https://blog.trello.com/be-vulnerable-to-inspire?
• Statistically 10% of agricultural businesses receive 81% of the sector’s turnover, while the bottom 50% receives only 1.3% thereof. The Competition Commission intends to address the issue of the domination of our economy by large firms.

FNB reported on residential building plan growth, drawn from data published by StatsSA, and which shows a significantly faster year-on-year growth of the number of residential building plans passed – in fact, more than the average number of pre-lockdown plans passed. This is interesting, because the expectation was for a much more subdued growth in the passage of such plans.

Semigration to the Cape is ongoing – a result of government policy and decent governance.

A Fidelity Fund Certificate is supposed to guarantee that the estate agent holder thereof is clean and is qualified and registered as estate agent. There appears to be unpleasantness over the issuance of such certificates by PPRA. Yawn.

A new schedule of Fees of Office, for deeds registrations, kicked in on 25 March.

News:
• An old friend (in a manner of speaking) has a lovely scam going: it is sold as a if you have a really big tax problem. He approaches you with “senior SARS official” in tow and, for a modest R100k or so promises to make the problem go away. You pay, the official, the money and he disappears. You cannot complain because your hands are dirty. Absolutely lovely. (The only way to sort out this problem is to pay for a hit… wink, wink).
• On a similar note is the fact that conveyancers in Pietermaritzburg are paying for expeditions, restorations and so on, on an increasing scale. The question is whether anything will be done about this.
• The Bobroff saga: the Bobroffs fled to Australia in 2016, evading numerous criminal charges, and have said that they would love to return to South Africa but needed assurances that they would not be arrested and held in custody, pending the outcome of their trial. Some R95m of theirs has now been forfeited to the state after a Concourt ruling to this effect.
• A week ago the Pretoria Deeds Office was closed owing to a rental dispute between the landlord and the Department of Public Works & Infrastructure: one can only marvel.
• Hoist with its own petard? No: remarkably, a municipality was able to rescind its own decision to award a tender for which it now had to pay on the basis of its own tender award being declared unconstitutional: http://www.saflii.org.za/za/cases/ZASCA/2022/28.html

Hard news:
• Our SCA held that only a court can judge on a dispute concerning the validity of an arbitration clause. The arbitrator cannot decide on such an issue as he has no jurisdiction until the relevant clause has been found to be valid. https://media.lawlibrary.org.za/files/judgments/zasca/2021/163/2021-zasca-163.pdf
• An interesting report by IOL, is that judgement was reserved by the Gauteng High Court in a matter where the court was asked to change our divorce law to allow spouses, married out of community of property without the application of the accrual regime, to claim for what they consider to be their financial contribution to the marital purse. This will entail declaring S7(3)(a) of the Divorce act, 1979, unconstitutional.
• The Concort handed down a judgement, declaring a tax assessment, in terms of sections 172/4 of the Tax Administration Act (which serves as a civil judgement) recindable. The case is not available on Saffli yet.
• For the latest on the definition of a Labour Tenant: http://www.saflii.org.za/za/cases/ZASCA/2022/29.html

We have heard this from Mr Zuma often and, whilst to a lawyer, this perspective is anathema, many in the ruling party hold the view that our courts should not be able to overrule political decisions correctly taken: “It cannot be correct that transformation and the will of the people gets undermined by one arm of the state, possibly making a mockery of the idea of democracy itself.” KZN Premier Sihle Zikalala.
The difficulty with this statement is that it extrapolates the will of a party to the will of the state and of the majority.

Clean? Our deputy president’s wife has been fingered in an alleged Mpumalanga land claims scam. If true, then we truly have corruption at the highest level in South Africa.

On a more parochial level, our Pietermaritzburg mayor has called upon citizens to work together to turn our city around: this sticks in the throat as political grandstanding from someone who is certainly not walking the talk. Not uncommon in South Africa. 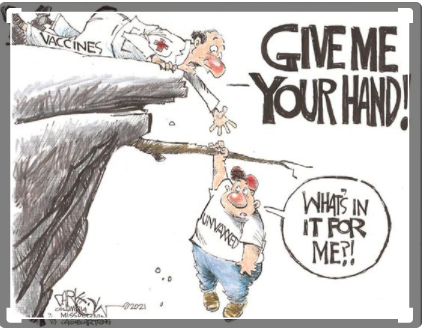