Been there done that: our roiling markets reflect the uncertainty that another lockdown will do to those sectors of our economy affected most by the Covid pandemic. Think travel/hospitality/tourism. On top of this uncertainty are two negatives that also harbour little cheer; the expectation that our economic expansion will slow drastically and the prediction that emerging economies might well experience a debt crisis accompanied by diminishing economic growth prospects.

I suspect that most South Africans could do without a promise of smart cities, incentives, and the like – we just want mail to be delivered: basic stuff to work. I read an interesting note by Bloomberg, pointing out that our economy is stuck in his longest downward cycle since World War II and that, whatever we do, it is unlikely that we will create sufficient jobs in the country where a third of our workforce is unemployed. Minister Godongwana is going to have his work cut out for him to rein in spending and implement reforms, given vested interests.

Do look at the following interesting topics:

What one deduces from this, is that our population growth is probably excessive and that in 2019 only some 1.3% of marriages were custom-based – no wonder lawyers are not really interested in ANCs and divorces involving customary law.

Another quite interesting statistic may be seen from a graph on Eskom’s tariffs versus inflation i.e. 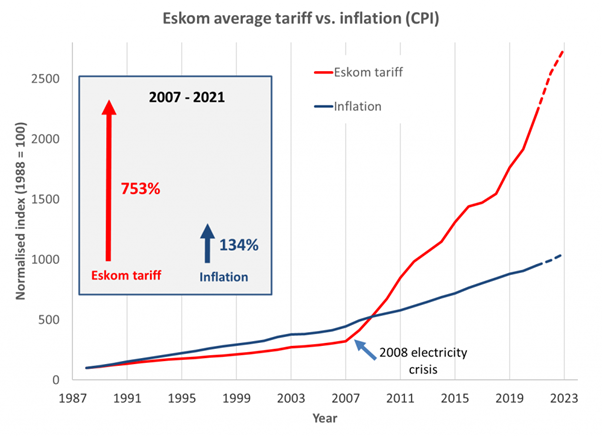 And, to add to this, Eskom has requested a 20% tariff increase for this year.

Another SOE? We are set to launch a new state-owned entity next year in the form of the Border Management Authority. The intent is that it will act as a type of law enforcement agency, employing its own guards to control and patrol the borders, modernising these points of entry into world-class one-stop border posts. One can but wonder why fixing the existing system is not preferred above creating another entity which, undoubtedly will require much more funding.

Some of the more interesting news snippets are:

in particular, look at paragraphs 68 and 71.

Emigration-related home sales peaked at 13.4% in the second quarter of 2019. Such sales now sit at around 8% of total sales. FNB says that wealthy South Africans are more likely to sell up and emigrate, as may be deduced from a statistic that 40% of home sellers, in the R3.6m bracket, are selling to emigrate.

The office market has deteriorated to the point where, at end-September, Growth Point Properties reflected a vacancy rate of 20.9% – an all-time high. Gauteng is worst off in this respect.

You must love the stats that come out inadvertently: Patricia de Lille says that about 1300 government-owned buildings are illegally occupied and, aside from not being optimally used, her department continues to pay rates and taxes on these properties! Interestingly, by far the most of these, i.e., some 540, are situate in Durban.

BS: you will recall that, just after the July riots, it was announced that the authorities held the particulars of those who incited that violence. No prosecution has followed and only those involved in “protection” (read Phoenix) has faced the NPA. This has led to speculation whether senior people were involved as it ill suits those in governance to have a go at them. Such a sidestep is wonderfully termed protocol.

In a similar vein, is the nonsense spouted by the Labour Department saying that naming and shaming those who received fraudulent payments from the Covid19 Ters scheme, would be illegal, because the documentation, signed by those who cheated, did not provide for such naming and shaming. If the representative had said that those who were to be charged could not be named before they appeared in court, one would understand. I have little doubt, that those involved, (many of whom are civil servants) will never face the NPA, despite having fraudulently lifted money not due to them.

More of the same? You have to love this: most of the municipal mayors have been re-elected but they promise to deliver better service this time around; presumably because we deserve this. This nonsense reminds one of the witticism (wrongfully) attributed to Einstein: Insanity is doing the same thing over and over and expecting different results.

“When disputes arise, she should, if convinced of right, maintain her point, for when the argument has passed, the husband will respect her all the more.”

Marriage means commitment. Of course, so does insanity.

Marriage is when a man and a woman become as one. The trouble starts when they try to decide which one.

Awareness of the insanity of love has never saved anyone from the disease. 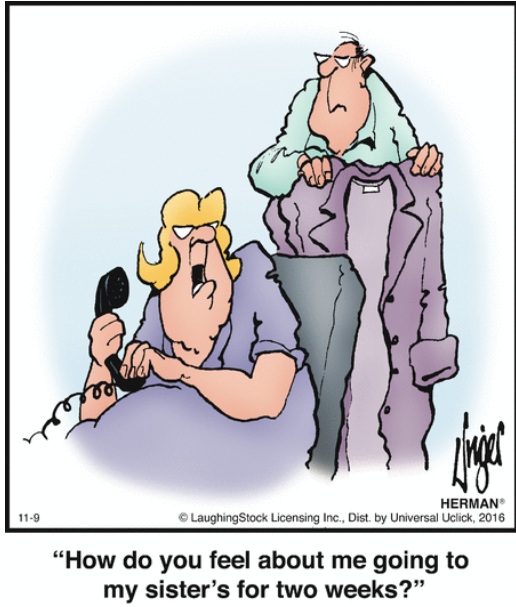